Mario Balotelli kicked the ball into the crowd and almost stormed off the pitch after suffering racist abuse while playing for Brescia against Verona, MySportDab Reports.

Balotelli’s Brescia team-mates and opponents rushed over to calm him down whilst the referee urged a statement to be read out on the speakers.
He was eventually persuaded to return by his teammates.
The referee also temporarily suspended the game in accordance with FIFA’s protocol. 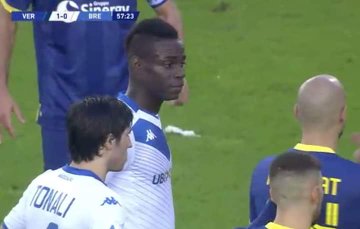 Balotelli later finished the game, even scoring a consolation goal in the 84th minute to silence the crowd.
Brescia fell to a 2-1 defeat against Verona, who picked up all three points thanks to goals from Eddie Salcedo and Matteo Pessina, but the vulgar racist abuse overshadowed the game.
Watch the video of what happened right below.