Anyone who knows Lionel Messi well will tell you that the Barcelona captain and talisman brings out his very best performance whenever he is under unnecessary and negative criticisms.

In a week where Lionel Messi was questioned by some of the fan base after he opined that Barca wouldn’t win the Champions League this season, the No.10 answered his detractors in the best possible way.

That the captain should be subjected to any sort of heat for his comments is an odd one. Players are often criticised for their ‘PR speak’ to media outlets, so when one comes out and talks honestly and openly, particularly as it’s Leo, he should be applauded rather than castigated.

In any event, his performance against Eibar was vintage.

That the Basques have always been the most of accommodating of opponents for the Argentinian is incidental.

On a day when Barcelona needed a performance of the highest quality, that’s what they produced. The opening 45 was a joy to watch at times, and were it not for Dmitrovic, the score might easily have been four or five in favour of the hosts.

He’d not hit the goal trail for a few games, but once Messi slid home the opener, there was a feeling that this could be his day.

The gap between the two centre-backs became ever wider, and you can’t give Barca that much space within which to work.

Messi’s movement was sharp and instinctive, his finishing back to the level we’ve come to expect from him.

This, don’t forget, from a player that is now playing further and further back in the system that Quique Setien appears to prefer.

If anything, Messi’s role now is that of a much more supplementary attacker, and yet he’s still the most dangerous weapon that Barca have when he’s on form.

With 20 minutes to go, Antoine Griezmann making way for Martin Braithwaite saw the Camp Nou rise in unison to acclaim the Dane.

Some would have you believe that he’s one of the most underwhelming signings for the club in recent times, but he does at least hand the club something different at the business end of the campaign.

He showed as much with a superb assist for Messi’s fourth and a hand in the fifth goal. Whether Setien uses him for anything other than cursory minutes remains to be seen.

Nothing should take away from the quality of Messi’s first-half, mind. We should never become accustomed to this.

Three trebles already this season when all of the other teams combined in La Liga only have one. Seventeen goals total, as well as all of the assists to date.

Age may begin to weary him, but never, ever write him off.

And just what do the opponents in this encounter think of the “merciless” Messi?

Barcelona’s opponents in this match were simply magnanimous in defeat.

Eibar may have been hammered 5-0 by Barcelona on Saturday at the Camp Nou but they showed some class with a post-match message to Lionel Messi.

Another goal arrived late on and saw Eibar join in with the praise for the GOAT after the full-time whistle on social media. 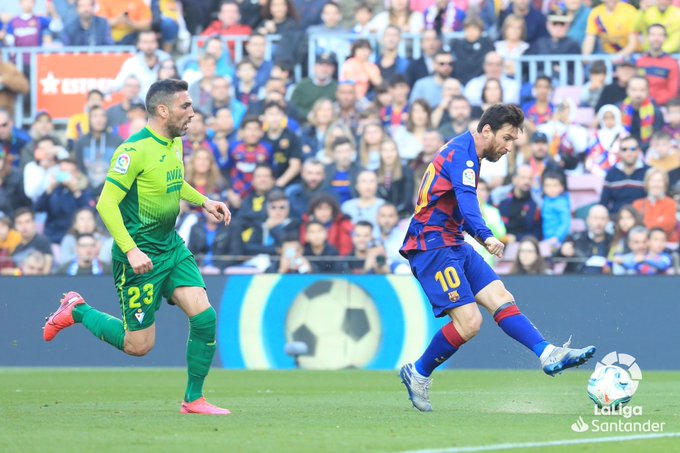 37.3K people are talking about this

The tweet reads: “We suffered against you, we put up with you and we endured you. Now there’s nothing more to do but to stand up and applaud you.”