On Keeping Up with the Kardashians, Kim Kardashian opened up to Kendall Jenner and Scott Disick about being high on ecstasy when she got married the first time.

After Disick told Kardashian that he couldn’t picture her as a “wild child,” Jenner admitted that she had “heard stories” about her older half-sister. Disick then said that he had heard about Kardashian being high back in the day, and Jenner was shocked.

“I got married on ecstasy,” Kardashian said. “No, the first time. I did ecstasy once and I got married. I did it again, I made a sex tape. Like, everything bad would happen.”

Kardashian was referring to her first marriage, to music producer Damon Thomas in 2000, and the infamous 2003 sex tape with her then-boyfriend Ray J, which was leaked in 2007.

“You were high on ecstasy when you were in that sex tape?” Disick asked. “Absolutely,” she responded. “Everyone knows it. Like, my jaw was shaking … the whole time.”

Jenner was astonished by how wild Kardashian used to be, saying, “I just can’t believe that that was you.” Kardashian assured her: “I still can do crazy things.”

Later, Kardashian said, “Kendall honestly has, like, no clue. I definitely went through a wild phase, I would say in, like, my late teens. I’m not like that anymore. But … I still have fun. Don’t get it twisted. I’m always the life of the party.”

Check out how Kim Kardashian reacted to Tristan Thompson when she finally saw him in person post-cheating scandal: 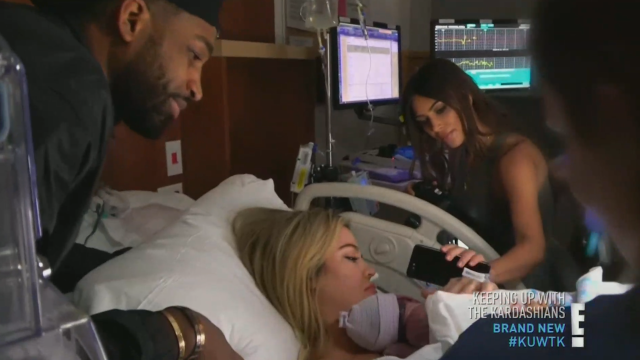 On Keeping Up With the Kardashians, we got to see what went down in the delivery room as Khloé Kardashian gave birth to her baby daughter, True Thompson, and how her sisters Kim Kardashian and Kourtney Kardashian handled confronting Tristan Thompson immediately following his public cheating scandal, which took place just days before Khloé went into labor.

Kim, who stood behind Tristan, while jokingly making gestures about slitting his neck, chose to “keep it cute” as much as she wanted to go off on the cheating basketball player, while Kourtney chose to make a subtle jab stating, “We can only pray” as a response to Tristan stating, “They say girls change your life,” as he held his baby daughter in his arms for the very first time.

Khloé, who wanted to stick to her birthing plan, allowed Tristan to be in the hospital room despite the fact that she had just received the heartbreaking news of his betrayal. “I want Tristan here with me,” shared Khloé.

“I want to experience this magical moment, and I want this for me and my daughter, and for him, at the end of the day. I’m mature enough to say that. I’m mature enough to, you know, put my personal feelings aside. And you know what? Me and Tristan will deal with him and I at a later time, when this isn’t affecting our child.”

And following True’s birth, Khloé stated, “My focus is not if we’re gonna be together or not. My focus is just on my daughter. And having these beginning moments with my daughter and seeing him be such a great father to her, that’s really what’s important to me.”