Freddie Ljungberg steps in as interim head coach; Sky Sports News has been told Arsenal have made contact with Massimiliano Allegri; watch Norwich vs Arsenal on Sunday, live on Sky Sports PL

Arsenal have sacked head coach Unai Emery after the club’s worst run of results since 1992.

Arsenal are without a win in their last seven matches following Thursday’s 2-1 defeat to Eintracht Frankfurt in the Europa League.

The Gunners have won only four of their 13 Premier League games this season and are now eighth, eight points adrift of the Champions League places.

Emery was appointed head coach at Arsenal in 2018 on a two-year deal, succeeding Arsene Wenger after his 22 years in charge of the club.

However, the Spaniard has been sacked after just 18 months in the role “due to results and performances not being at the level required”, according to a club statement.

Freddie Ljungberg, former Arsenal midfielder and member of ‘The Invincibles’, will take charge of the first team while the club searches for a permanent replacement for Emery.

Arsenal director Josh Kroenke said: “Our most sincere thanks go to Unai and his colleagues who were unrelenting in their efforts to get the club back to competing at the level we all expect and demand.

Thank you @UnaiEmery_ and Javi I’m sorry we let you down , it’s our fault for not performing the right way , I’m sure we will meet again 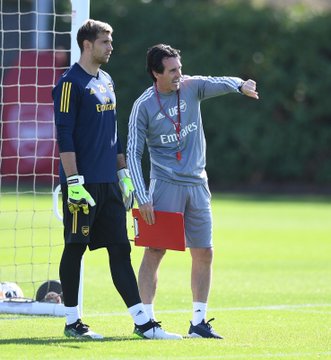 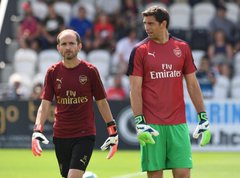 2,779 people are talking about this

“We wish Unai and his team nothing but future success.”

Arsenal say they have “full confidence” in Ljungberg, who will take charge of the Gunners for the first time against Norwich on Sunday, live on Sky Sports Premier League.

Sky Sports News understands several senior figures at the club, including head of football Raul Sanllehi and technical director Edu, had decided before the Frankfurt match that Emery needed to be replaced.

Sanllehi had flown to the United States earlier this week along with managing director Vinai Venkatesham to hold talks with Arsenal owner Stan Kroenke and his son Josh Kroenke over Emery’s future.

It is believed Kroenke was willing to give Emery more time but lost faith in the Spaniard after Thursday’s defeat.

Sky Sports News understands Emery arrived for training on Friday morning and was sacked during a meeting with Sanllehi and Edu.

Who next for Arsenal?

It is understood some senior figures at Arsenal wanted Jose Mourinho to replace Emery before he joined north London rivals Tottenham as head coach.

Sky Sports News has been told Arsenal have made contact with former Juventus manager Massimiliano Allegri, who has been without a role since leaving the Italian champions at the end of the 2018-19 season.

But former Arsenal striker Charlie Nicholas told Sky Sports News: “Arsenal need to get a bit of leadership and togetherness, and if they’re really serious about moving this forward and moving it on, they must go and get Brendan Rodgers now.”

Why have Arsenal sacked Emery now?

“Simply put, results have not been good enough. Arsenal have not won a game in seven matches, the players don’t seem to be playing for him and the fans have turned on him as well. Last night’s game against Frankfurt, the official attendance was about 49,000 but a lot of people here think there were only about 25,000. That is the lowest attendance for a game at the Emirates.

“Our information is that a lot of people behind the scenes had lost faith in Unai Emery, but the main reason he has lost his job is results. You can go back to last season as well, when Arsenal missed out on qualifying for the Champions League by one point, then had that chance to get into the Champions League in the Europa League against Chelsea, they lost that as well, 4-1, and they went into the Europa League again.