The teenager struck the winner against Inter Milan

Ansu Fati made yet more history on Tuesday night against Inter Milan as the 17-year-old became the youngest goalscorer in Champions League history. 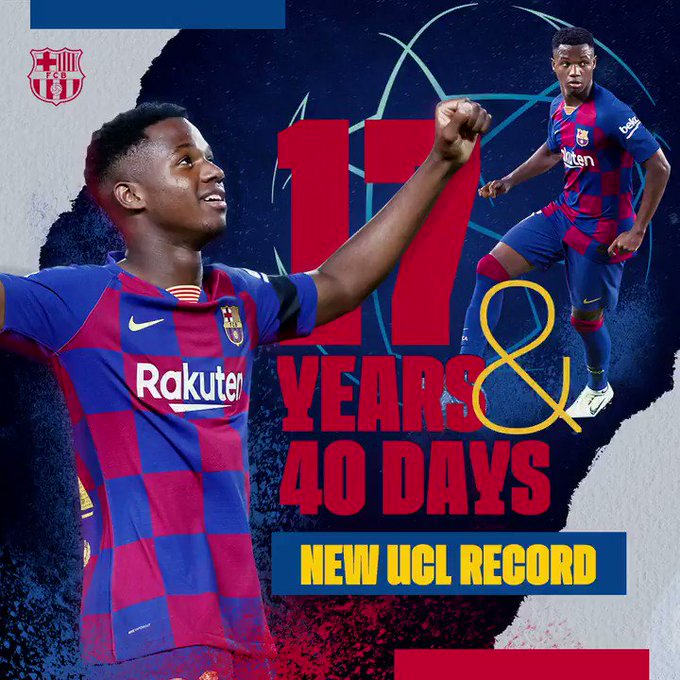 The forward missed Saturday’s win over Real Mallorca due to injury but was back in the squad for the trip to the San Siro and came on after 84 minutes for Carles Perez.

Ansu took less than three minutes to make an impact, firing home the winner with a low shot that crept past Samir Handanovic and squeezed just inside the post to make it 2-1.

The goal means he beats Peter Ofori-Quaye’s record (17 years and 194 days) to become the competition’s youngest goalscorer at the age of 17 years and 40 days.

The Champions League group stage has come to an end for the four teams in Group F, and Barcelona finished things off with a heroic 2-1 win against Inter Milan at San Siro. With a team filled with reserves and young players Barça played a very good game while also surviving an insane pressure from Inter, including three disallowed goals. Barça are through as group winners, Inter are going to the Europa League, and this team has made the fans very proud. What a night.

The first half was a lot of fun from the beginning, with Inter playing with crazy intensity and attacking intent while Barça looked to weather the early storm to grow into the game later. The hosts nearly scored a couple early on but Neto came up big in his Barça debut, with at least two really good saves.

Barça did grow into the game and put together some really good passing combinations, and one of them led to the first goal thanks to a brilliant pass from Antoine Griezmann that deflected off Diego Godín and fell to a wide open Carles Pérez, who scored his first Champions League goal with a nice finish. The Blaugrana came very close to a second, but Clément Lenglet missed a huge chance right in front of goal.

Inter amped up the pressure desperate for an equalizer before halftime, and despite a couple more saves from Neto they eventually found a breakthrough thanks to a great strike from Romelu Lukaku.

At halftime, a brilliant game of football was all square and Inter still needed to win, so Barça had to prepare for a blitz in the final period.

As Borussia Dortmund took the lead in the other game Inter had no choice but to send everybody forward and take as many shots on goal as they could. Barça had no choice but to try and survive the blitz and look to kill the game on the counter, and they had a couple of big chances with Griezmann and Pérez but couldn’t convert.

Inter were as intense as you can be and a goal seemed like a matter of time, and Lautaro Martínez actually did it twice only to have both goals disallowed for offside. And then Inter had their hearts broken: less than a minute after coming on as a substitute, Ansu Fati made a one-two with Luis Suárez and scored a beautiful goal, and the Barça reserves were shocking the San Siro.

Inter had no energy to try and equalize, and the final whistle came to end an amazing night for Barça. This was just really impressive for a team that’s never played together, and boy is it fun to watch Ansu Fati shine.